Please feel free to get in touch 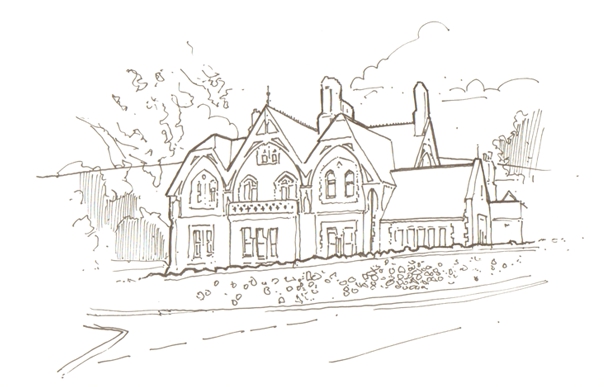 There is parking on the roads close to the house, but not at the house itself. From the Pay and Display car parks on Priory Road, opposite Malvern Splash, it is just a short walk – turn right, at junction turn right into Avenue Road – then Elmslie House is the last house on your right before Albert Road South. Walk down the driveway, and the entrance is the first doorway on your left.

Great Malvern railway station, also designed by E. W. Elmslie, serves both London Midland and First Great Western and operates trains between Worcester and Hereford and also regular services to London Paddington, Oxford, Bristol and Gloucester. It is situated close to the centre of Great Malvern and is just a short distance from Elmslie House. In 2010 it celebrated its 150th anniversary. In 2014 English Heritage published a list of the ’10 greatest English railway stations’ and Great Malvern, “one of the most characterful stations of the 1860s”, is ninth – and well worth a visit.